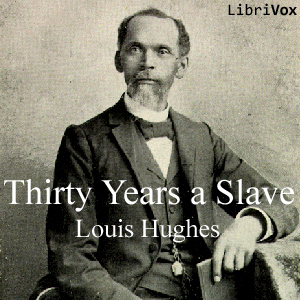 LibriVox recording of Thirty Years A Slave, by Louis Hughes.

Louis Hughes was born a slave near Charlottesville, Virginia to a white father and a black slave woman. Throughout his life he worked mostly as a house servant, but was privy to the intimate details and workings of the entire McGee cotton plantation and empire.

In Thirty Years A Slave Hughes provides vivid descriptions and explicit accounts of how the McGee plantation in Mississippi, and the McGee mansion in Tennessee functioned--accounts of the lives of the many slaves that lived, suffered and sometimes died under the cruel and unusual punishments meted out by Boss and his monstrously unstable and vindictive wife. He described the profane manner in which this peculiar institution dehumanized, on a daily basis, not only the black man but even more so the white man.

Ultimately, Thirty Years A Slave is an expression of Hughes’s desire to accurately describe the nature of the influence that the institution of slavery had on this country during the two hundred plus years in which it existed here, and the influence it continues to have on the heart and soul of a post-Civil War, post-14th Amendment United States. (Introduction by James K. White)

Reviewer: stbalbach - favoritefavoritefavoritefavoritefavorite - April 10, 2021
Subject: Thirty Years a Slave
Read via the LibriVox recording by James K. White, one of the best narrators around, free or otherwise. Hughes wrote this memoir in 1897, 32 years after his 30 years of slavery, but it is fresh with many telling details. It has informed scholarly books on slavery, Hughes is often quoted. For a slave POV in the Memphis area, it is one of the best primary sources available. Hughes was enslaved from birth to 1865 - or 33 years. However, the Emancipation Proclamation was in 1862, and therefore Hughes was not technically a slave the last 3 years, rather a worker unpaid as he transitions to full freedom - thus the "Thirty" years. Hughes would not let himself be a slave one year longer than truth would allow. One has a sense Hughes was more intelligent than his so-called masters, whom he takes pity on in the end. This account includes the kind of brutality seen in other memoirs, the whippings in particular are hard to read. But there is also the Madam McGee who is emotionally and physically abusive - boxing ears and face, pinching ears, never praising and always complaining now matter how hard one works, it is Chinese water torture of the soul. I really liked this, on par with Twelve Years a Slave.

Uploaded by librivoxbooks on August 31, 2011